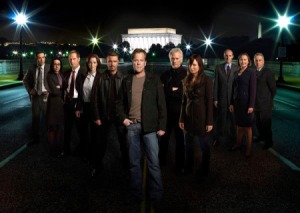 If I learned one thing in today’s double episode, it’s that breaking into the White House is apparently quite easy. With a small amount of goons (at first,  less than 10, but later, magically, more appeared), Juma (yeah, he’s in D.C.) and co. planned the attack, took a boat ride, went scuba diving, started drilling an underwater hole as episode 11 closed, and had made a massive hole by the time episode 12 opened (in the span of one second?!). And that’s before even getting to the White House!

Once in the White House, they shot everyone in sight, took hostages, managed to get secret service out of the building, shot Aaron (no!), took the President’s daughter hostage, and convinced President Taylor to convince Jack to open that door. Phew.

All that in two hours.

Yeah, today’s episodes weren’t the most believable, but they made for exciting TV. Jack’s use of the Taser on that scummy dude (and bonus points for using the Taser on the phone) was a new technique for Jack. We haven’t seen many Jack interrogations this season.

So now we’re at a standstill with the confrontation at the White House. The preview makes it seem like there will be a struggle between soft Larry of the FBI and scared Vice-President. The battle of timidness will happen next week, folks. Stay tuned.