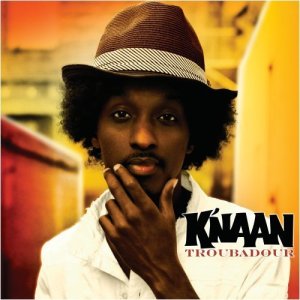 If you like K-os you’ll love K’naan. Born in Somalia and now calling Toronto home, K’naan is an authentic Akon, embracing his African roots both lyrically and musically without the exploitation or thug posturing .

His second album, Troubadour is an eclectic batch of musical influences: Rock guitar riffs, African percussion, reggae horns and chanting all coexist in a fluid bedrock that supports a foundation of great hip-hop.

K’naan is an honest storyteller. He manages to remain hopeful amid his often horrific tales of growing up. This is most evident in “Fatima.” What should be a gut-wrenching tale of losing your true love to senseless gun violence is instead a celebratory tale of K’naan’s fallen girlfriend.

Equally powerful is “Wavin’ Flag,” K’naan’s triumphant biography of coming from nothing and fighting for freedom.

K’naan also gets plenty of help on his journey of struggle. Chubb Rock assists on the head-nodding, horn-driven “ABCs,” Damian ‘Jr. Gong’ Marley contributes a verse to “I Come Prepared,” and Maroon 5 frontman Adam Levine sings the hook to “Bang Bang,” an upbeat African percussion-based song that borrows from Pharcyde’s  classic “Passing Me By.”

Unfortunately, the best collaboration on paper, “America,” featuring Chali 2na of Jurrasic 5, and Mos Def, is disappointing. The song features a lazy and repetitive sample and uninspired verses by all participants.

But as a whole, Troubadour has an overwhelming sense of celebration, with K’naan always remaining positive in the face of adversity on songs like “Dreamer” and “Somalia.”

*Thanks to All The Way Live for the awesome K’naan live audio they have.