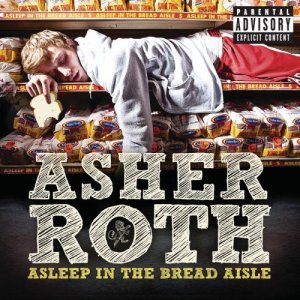 The first thought that enters one’s mind upon hearing Asher Roth’s first single, “I Love College,” is “one hit wonder.” Over a not-so-subtle replaying of Weezer’s “Say It Ain’t So,” Roth delivers a gimmicky, catchy, and extremely corny frat-boy ode to boozing, smoking and partying that lacks any sort of thought-provoking content.

Yet, it works. To an extent.

Appealing to a basic staple of Americana, the craziness that is the higher-education years, Asher gives off a regular-dude vibe that is both appealing and genuine, traits not often found in a hip-hop genre filled with extravagant boasting and ridiculous claims.

These traits carry on throughout Roth’s debut album, Asleep In The Bread Aisle, a look into the mind of a 23-year-old white rapper from a Philadelphia suburb that didn’t listen to hip-hop until Jay-Z’s 1998 song “Hard Knock Life.”

Musically, much of the backdrop is provided by rookie producer Oren Yoel. The production is dominated by raw breakbeats, simple basslines and thumping electric pianos  reminiscent of the Beastie Boys’ beats, and that can be easily played by Asher’s band when he performs live.

The organ-driven “Be By Myself,” featuring Cee-Lo, could easily be a Gnarls Barkley leftover, while the energetic “La Di Da” and “Sour Patch Kids” display Asher’s best lyrically. Roth and Busta Rhymes even trade rapid-fire verses on the hilarious lovemaking boast song, “Lion’s Roar.”

But much of Asleep In The Bread Aisle is… boring. Asher seems to purposely milk his Average Joe,  dormroom-next-door persona, possibly as a stark contrast to Eminem and other white rappers who have had to play-up a wacky persona to find success. But because of this, he often is uninteresting to listen to.

His rapping skills are only average (don’t expect any Rakim-worthy verses), and his stories are no more compelling than any other middle-class suburban kid’s. Combined with often uninspiring production, songs like “Lark On My Go Kart” and “Blunt Cruisin’ ” keep Roth’s debut from having a significant impact on hip-hop.