Review and Setlist: Drake in Miami 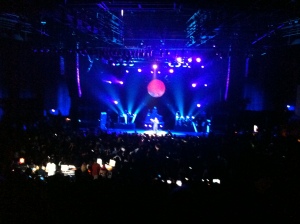 As featured on Miami.com and in the Miami Herald

Having recently moved to Miami, it was only appropriate for the most hyped freshman in hip-hop to open his first large-venue tour in the Magic City.

The 23-year-old Toronto rapper, singer and former teen actor kicked off his Light Dreams & Nightmares Tour with a sold-out, two-night stint at the James L. Knight Center in Miami. The performance managed to be a spectacle of sight and sound, while still highlighting Drake’s nuanced, introspective songwriting.

Taking the stage at 9 p.m. to the sounds of “9AM In Dallas,” the artist born Aubrey Graham was joined by a band consisting of a DJ, guitarist, drummer, keyboardist and backup singer. They were led by acclaimed bassist Adam Blackstone, who has served as musical director for Kanye West, Jay-Z and Eminem.

Throughout the night, Drake tackled material from his platinum-selling debut, Thank Me Later, as well as tracks from his acclaimed mixtape So Far Gone. His songs, much of which are minimalistic and reflective, seem like they would be the antithesis of arena music. But the up-and-coming star, with his trademark hunched posture and deep robotic voice, kept the crowd on its feet for the duration of the show.

The simple lighting rigs, along with a giant overhead globe, provided the perfect accompaniment for the mood of the music. Somber hues of blue and purple bathed him during “The Resistance” and a sea of green lasers shot into the crowd during an energetic performance of “Unforgettable.” And after dropping to his knees during the melancholy “Fireworks,” actual fireworks lit up the stage behind him.

The band was dynamic: swinging from quiet, plush pianos to bombastic guitars and snappy drums on “Shut It Down” and “Light Up.” During a cover of “Un-Thinkable (I’m Ready),” a song that Drake wrote for Alicia Keys, he shared a suggestive slow dance with a female fan on stage, kissed her neck, then offered her a new Blackberry Torch smartphone, all while plugging the tour’s sponsor, AT&T.

His loyalty and pride for Young Money Entertainment served as motif throughout the night: He constantly asked the crowd to chant “Free Weezy,” in reference to the record label’s boss,  Lil’ Wayne, who is currently serving a one-year prison sentence in Rikers Island, New York. Drake performed his verses from Young Money songs “Every Girl” and “Bedrock,” as well as “Right Above It,” the first single from Wayne’s upcoming album, I Am Not A Human Being. He was also joined on stage by Cash Money Records co-founder Birdman for “Money To Blow.”

Unsurprisingly, Drake closed the show with his biggest hits: “Best I Ever Had” and “Fancy” were performed straightforwardly.  But after asking the crowd if they thought he’d find the woman of his dreams in Miami, he launched into a haunting version of the Kanye West-produced single, “Find You Love.” Although he refrained from crooning much of his choruses earlier in the night (he let prerecorded backing vocals handle that), “Find Your Love” showed that his live singing voice can match its studio sound. He ended the song with his fiery rap verse from “Paris Morton Music,” declaring his arrival to the pop world and his departure for the night.

Drake wouldn’t leave Miami without an encore, though. He emerged under a stage-engulfing cascade of downward fireworks and appropriately closed the set with his orchestral hit “Over,” which was followed by an extended jam outro by his band. Before exiting the stage, he thanked Miami for “one of the best […] shows I’ve had in my life.”

Young Money labelmate Tyga opened the show with a 30-minute set that included songs like “Roger That” and his new collaboration with singer Chris Brown, “Deuces.” He brought out Miami artist and WEDR 99 Jamz radio personality DJ Khaled for “All I Do Is Win.”

Check out the setlist:

4 thoughts on “Review and Setlist: Drake in Miami”