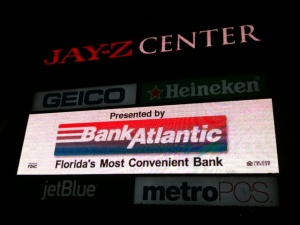 Jay-Z and special guests Young Jeezy and Trey Songz kicked off The BP3 Tour with a performance at the BankAtlantic Center in Sunrise, Fla.  You can read my full review and see photos from the show at the Miami Herald.

How often do superstars Diddy, Beyonce Knowles and Alex Rodriguez rub shoulders with fans on the other side of the big stage? At the BankAtlantic Center Saturday night, the three watched from the floor, surrounded by a crowd that Jay-Z kept on its feet for almost two hours.

The Sunrise, Fla. venue, renamed the Jay-Z Center for the first night of the rapper’s nationwide BP3 Tour, pulsated with every bassline and guitar lick emitted from his 10-piece band, the Roc Boys.

The 40-year-old Brooklyn-bred mogul, born Shawn Carter, rose from under the stage to the brooding piano chords and rolling drum snares of Run This Town. As per the song’s lyrics, Jay-Z and his band band wore “all black everything.” A New York Yankees fitted cap and Wayfarer sunglasses concealed the face of the rapper, who has tried to keep his personal life — including his marriage to Beyonce — as low-key as possible.

The show’s staging was anything but subtle, though. The Grammy winner’s backdrop was a giant screen shaped as New York City’s skyline, with visuals reflecting the songs’ music videos and lyrics.

Jay-Z’s performance was worthy of his stature as an artist: He has the record for the most number one albums on the Billboard 200 charts, recently ousting Elvis Presley with his 11th studio album, The Blueprint 3, for which the tour is named after. Onstage, he commanded the band, the microphone and the audience.

The first half of the set was the strongest: He barreled through a mix of hits (99 Problems and I Just Wanna Love U), album cuts (Already Home and U Don’t Know) and remixes to other artists’ songs (Kanye West’s Diamonds From Sierra Leone and Snoop Dogg’s I Wanna Rock). He was assisted by long-time protege and sidekick Memphis Bleek for the early half, as well as up-and-coming singer Bridget Kelley. The latter, signed to Jay-Z’s new Roc Nation label, provided vocals on the underrated 2001 soul jam, Heart of the City (Ain’t No Love), and filled in for Alicia Keys on Empire State of Mind, the ode to New York City that was Jay-Z’s first number one single as a solo artist on the Billboard Hot 100 chart.

But the BP3 Tour wasn’t without its flaws: Towards the end of the first half, he began losing his voice, and noticeably stopped to drink water. The three-piece horn section, crucial to songs like Show Me What You Got and D.O.A. (Death of Auto-Tune), was essentially muted.

The problems only continued as Atlanta-based rapper Young Jeezy emerged for Real As It Gets. Billed as a special guest of the tour, Jeezy should have been an opening act instead of a halftime sideshow for the vastly more talented and better performing Jay-Z. Whereas Jay clearly enunciated every word of every song, Jeezy rarely finished a line.

At 30 minutes, Jeezy’s set was bloated and hampered the rhythm of the show (although it did give Jay an opportunity to rest his hoarse voice). Even with the Roc Boys doing a superb job of backing Jeezy for songs like Hard and Put On, it took Jay re-emerging for My President for the crowd to get back into pace.

Dirt Off Your Shoulder was preceded by a comical video clip of President Barack Obama quoting the song during a speech. As if to imply his dominance in hip-hop, Jay-Z instructed his DJ and studio engineer, Young Guru, to play more of his hits, which led to a brief medley of a dozen more songs he could have easily performed in his main set.

Between the crowd sing-along of Big Pimpin’ and the show ending Encore, Jay-Z took time to acknowledge the audience.

“I’m not jaded, I appreciate every one of you being here,” he said, as he removed his hat and sunglasses to reveal his face for the first time. He spent the next several minutes identifying individual fans and personally thanking them for supporting his career.

It was a surprisingly humble moment: One of the most successful — and wealthy — musicians of the modern era, showing his appreciation for the people that helped him get to this point in his career.

Earlier in the night, Virginia R&B singer Trey Songz and his five-piece band opened the show with a 35 minute set of hypersexual slow jams like I Invented Sex and Say Aah.

11 thoughts on “Concert review and setlist: Jay-Z at BankAtlantic Center”