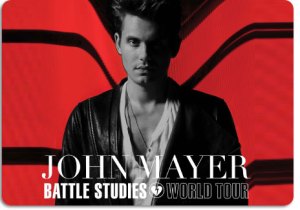 On the first date of his Battle Studies World Tour at the BankAtlantic Center in Sunrise, Fla., John Mayer debuted a new concert configuration that relied more heavily on theatrical presentation than ever before.

After a vintage black-and-white-TV countdown was projected on a thin white curtain engulfing the stage, red and black-tinted video footage was shown of Mayer preparing to perform. With the first atmospheric, U2-esque chords of “Heartbreak Warfare,” the curtains opened to start the show.

Mayer did his best Eric Clapton impersonation with a performance of Cream’s take on the Robert Johnson classic, “Crossroads,” which was accompanied by psychedelic visuals on the giant screen behind him.

The set list was heavy on Battle Studies songs, but the audience was most animated during Mayer staples like “Bigger Than My Body” and “Why Georgia.” A jammed out, loose version of “Waiting On The World to Change” featured extended solos by most band members.

Regardless of the changes, the band sounded tight: Drums were crisp and snappy, bass was appropriately thumpy, and guitar solos soared.

The most visually impressive moment was “Assassin,” which featured war schematics and sniper imagery onscreen, while the wild, morphing, chandelier-like lighting rig swirled colorful showers of light on the band.

Mayer closed the show with a lengthy rendition of his latest albums’ closer, “Friends, Lovers or Nothing.” The extended gospel outro to the song served as a suitable ending to the two-hour set.

Michael Franti and Spearhead opened for Mayer, bringing their brand of funky reggae rock to the show. Their one hour set included their hit single “Say Hey (I Love You),” as well as a cover of Michael Jackson’s “Billie Jean.”